It is Sunday morning. Brenda has been sick all weekend and if I was going to church it would be alone.

It was pouring rain outside. The dash to the car was not fast enough and the coolness of the rain rolled down between my collar and my shirt. I paused to make sure I had an umbrella in the car for the walk from the parking lot to the sanctuary. I’m ready to go.

Not many cars on the roads as I made my way downtown. My car radio is not working right now so the sound of the rain and road seemed to expand into all the openness of my vehicle. I thought I might break the fan switch as I changed it constantly blowing first on the windshield and then onto my feet. It was cold.

The Rainy Season in Vancouver

Often it seems that visitors come to Vancouver when it is not raining and I feel compelled to tell them that there is a reason why it is so green here. Fall is often really nice in Vancouver, but it is also the time when the rainy season begins. During October the average amount of rainfall shoots up, and remains high until the end of February and that is when the crocus and daffodils come up. Our wettest month on average is November.

There is a prime piece of real estate that we drive by on Sundays. Not prime for real estate investors, but rather for the homeless. It is located at the exit off the freeway at First Avenue. This is the corner I am speaking of

and notice the trees and the bridge off the left curb. They provide needed shelter from the rain. This photo from Street-View was taken on a much nicer weather day than today.

The cars were backed up about six deep in each lane awaiting the signal to change when I saw him.

He had a very weathered face reminding me of children I have seen who are malnourished. He was shivering as he stood with his polite cardboard sign asking for any help or assistance you could provide. No one moved. Not a window rolled down and all eyes kept looking forward as he patiently walked up the line of cars. That is when I honked and motioned for him to come over to my window.

“Cold out isn’t it?” I said from the inside of my warm automobile.

“Not bad,” he replied. (I guess it is all a matter of perspective as we have had some snow the week before.)

“What is your name?”

“I am Carson..here, this is for you.” I handed him some change, the equivalent of less than I might have paid to get a coffee for the drive.

Eric reached out his hand to shake mine, “Thanks Carson, I hope you have a good day.”

Just then the light changed and cars started moving. Eric smiled and waved as I drove off. I smiled back. 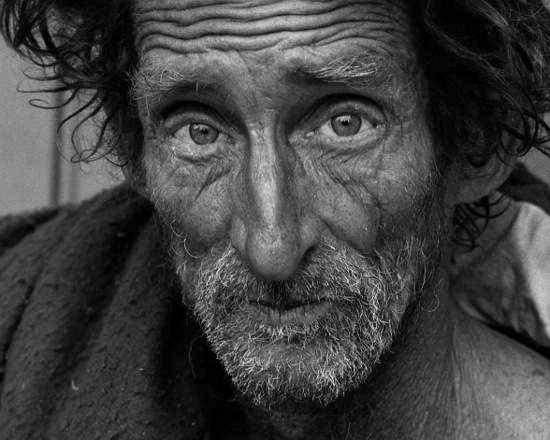 I have been smiling about that interchange all day. It was the highlight of my day. Why? Because I was reminded again how important it is to realize that the people around us in our lives and in our neighborhoods all have names.

It can be so easy to depersonalize situations like the homeless around us, or perhaps even a member of your own family that you would rather not have anything to do with. Yet they all have names and we should stop more often to find out what they are.

Brenda and I purchase most of our groceries at a neighborhood store that is not really that big. We are probably there once a week and we have lived in this community for over 16 years. So I have been convicted about not even spending the time to get to know the names of the staff. I am getting to know them now and notice how they ‘light up’ when I go, “Hey Sharon, how is your day going?” or “Bethany, nice job shelving the soup cans!” said with a big smile.

There are many other regular stores, gas stations, government offices and banks in my life with people I see quite regularly. I want to get to know their names and start using them when we interact.

There was a woman…

Jesus had an encounter with a street person, a woman who we are told had been bleeding for twelve years. The biblical text (Mark 5:21-43) only refers to her as ‘a woman’ – at least until Jesus came along.

Jesus said to her, “Daughter, your faith has healed you. Go in peace and be freed from your suffering.”

She suddenly went from being the dispossessed, outcast, exiled, unknown, untouchable – to Daughter.

Today, I saw the look in Eric’s eyes as he was called by name. I am committed to do it more.

3 thoughts on “Eric and a dollar twenty five”