I have come here really knowing Kuwait for one reason; it was a catalyst in sparking the Persian Gulf War of 1990-1991. Iraqi troops invaded Kuwait August 2, 1990 bombing Kuwait City to smithereens. In response to this surprise attack, President George H. Bush deployed American troops to Kuwait as part of a coalition force to beat back the Iraqi Army. But the damage had already been done. Kuwait City was in ruins. Iraqi troops set oil wells on fire, eliminated all resistance, and stole $700 million worth of gold bullion was from the Kuwaiti government.

Today, Kuwait City is a completely different place. With help from the US and other countries, they have rebuilt a new country and so much of the city has been rebuilt from the sand up.

Driving in Kuwait, the modern buildings of Al Kuwayt (Kuwait City) pierce the skyline proudly show casing the wealth of the nation. The architecture is outstanding. We could also see the palm trees and plush green landscape weaving through this concrete jungle, and sparkling blue water of the Persian Gulf encompasses the northern part of the city. 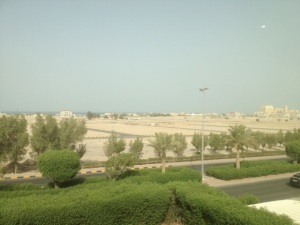 at harvest time for golden sand stretches to the horizon. (Well, it does but without the grass, rolling hills and trees.) The highest point in this entire postage stamp size country is 306 meters high.

The population of Kuwait is about 2.5 million. Most of them live in Kuwait City and of these, one-half are non-nationals hired to serve the Kuwaitis.

The people once lived as tribal nomads or as town dwellers but with the discovery of oil in the twentieth century, the traditional Arab culture of Kuwait advanced rapidly. Unlike most Arab countries, Kuwaiti Arabs enjoy a modern, industrialized society. However, I did witness how at times the old “Arab ways” and values conflicted with modern, urban life. 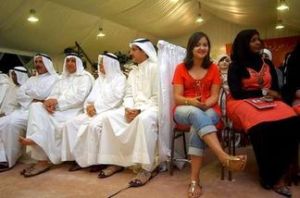 Kuwait is hot. The temperature remained in the low forties the entire time we were there. Bob and I are travelling with special clothing made for washing in hotel room sinks and drying over the shower bar. During our time in Rwanda it rained a fair bit and so drying our clothes became a three day operation. I did a wash in Kuwait, hung my clothes to dry outside and voila! Ten minutes later they were not only bone dry, but stiff also!

Islam and other faiths

The prophet Mohammed lived in the area, and it was here that he developed Islam as a new religion. Kuwait culture is now based on Islam, and it is the main religion in Kuwait. It influences architecture, clothing, food and other ways of life.

While Muslims demand for concessions in non-Muslim countries like my own, Canada – non-Muslims are systematically persecuted, terrorized and ethnically cleansed from most Islamic lands. But unlike other Arab countries, Kuwait allows non-nationals to practice their own faiths. Today, eighty-five percent of the people here are Muslim and the remaining thirteen percent are Christian, and two percent Hindu, and Parsi followers.

So in the heart of Kuwait City there is a church – by that I mean the body of followers of Jesus – who are living and leading well. I do not want to be too specific about the nature of their ministry so as to not possibly hinder their presence there, but I had the privilege of preaching at four of their twenty-four services on the weekend we were there. That is correct, twenty-four. (I think it is now up to twenty-eight). Bob also preached a one of the services and it was a very meaningful experience for us both. This is a church that ‘gives back’ when you preach. They are engaged, responsive and people of action. You get the impression they will take what they learn from this sermon and apply it next week where they live or work.

A ministry and marriage seminar was also held on the weekend for leaders of this large congregation and I was again impressed and touched by this group of people. I loved them and their leaders.

This is a church that has grown through multiplication. At the heart of it is transformation – they celebrate transformation in people’s lives. They have a very in-depth discipleship process as a key element of their church.

As I have pondered our fantastic time in Kuwait (including an afternoon on jet skis in the Persian Gulf) I learned something I am bringing home to our church.

Transformation is the key,

and obedience is the key to transformation.

2 thoughts on “Transformation of Kuwait”