We were excited about getting picked up at 7:30am to begin a drive north of Addis to an Area Development Project of World Vision in a village area called Abote.

Having been in Addis Ababa for several days we asked many people about Abote to find that no one had heard of it. They had all heard of World Vision but had no idea where we were going. This would not be the first time that World Vision was at work in a region that was off the map and when we read our itinerary and saw that we would be travelling the final portion of the trip be vehicle or horse we knew we were in for quite the experience.

With the help of World Vision Canada we had arranged for Bob to actually meet eleven year old Abesha, one of children that he and his wife Renae sponsor. 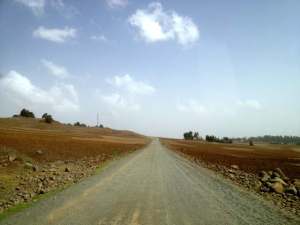 Driving out of Addis we started out on paved roads but we turned off the highway after two hours on the road to Abote.

This area development project has 5070 children registered by World Vision who have been working with the people here for twelve years. Prior to World Vision coming off-road to the people here only 2.5% had access to potable water. There were many water borne diseases.

Only 2% of the people used a pit latrine and just 25% of the children had been immunized.

Now twelve years later we found a very different situation where the community has been transformed including having some banking/credit services with 2500 clients so that they do not have to pay the 120% interest rates charged by money lenders. Eighty one percent of the people have access to potable water.

We walked the last section of the journey to Abesha’s home and found the family waiting outside for our arrival.   I wish you could have been with us to see the response of Abesha and his mother when they were introduced to Bob. She was overjoyed and filled with emotion.

Abesha has a sister and brother living with he and his mother. His father and an older brother were not present for they are working in southern Ethiopia.

Bob presented Abesha with a soccer ball and pump and the two of them spent time kicking the ball back and forth in front of the hut. Abesha was unable to wipe the smile off his face.

His mother then invited us into their home where she proudly showed us the photo of Abesha and the record card from World Vision. Their house was one room approximately 100 square feet with the floor and walls made of cow dung. She then asked us to be seated while she went to the cook hut next door and brought us a plate of bread she had cooked and coffee served with some form of sugar already added.

I will always be deeply touched by how people with so little, can be so generous. When we had finished with the bread, she took the remainder outside and shared it with all the neighbors who had gathered to see the two white men visiting their village – only ten would visit here in a year.

When we departed we both felt somehow blessed. 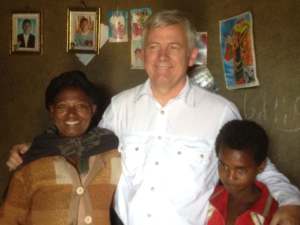 We spent the night at a hotel nearby – well when I say hotel it may conjure up an image of something other than where we actually stayed.

Before we went to sleep we paused to reflect on our visit to one of the most grateful families, and homes we have been to in a long time.

Now I realize that it is simply not possible for every supporter to meet your sponsored child. However this experience showed the two of us how a small focused emphasis on monthly sponsoring a child can influence and entire community.

We are deeply touched.