Buenos Aires: Now here is a complex city. It is an ocean port and the name until the 17th century was “Port of Saint Mary of the Fair Winds.” The sailor in me likes the connotation but as I hope to share in a few blogs – there are other, not so fair winds that blow here.

Soon after arriving I realize I have been pronouncing the name of this city of 13 million incorrectly – for years. My best shot at it now is “bwā-nəs-ˈa-rēz” and my tongue stumbles over the “r” while trying to emphasize the hard “e” in Aires.

We have had a wonderful host the entire week here in Catalina (Catherine) Ogden. Catherine is a Regent College alumni who we were connected with through Jim Houston – and what a delight that has been. She has served as our remis (taxi), translator, and cultural guide. When not guiding Canadian pilgrims around her city she works for the United Nations in the heart of downtown BA.

Buenos Aires is really is a city of many cities. The first Buenos Aires is a typically poor Latin American city of shabby streets fronted by strident advertisements offering cheap phone calls, ‘branded’ clothes and electronic goods. But look above and behind, and a second city appears.

Here, the electronic billboards do not quite conceal ornate European buildings constructed in the late 19th and early 20th centuries, with their graceful Doric columns, art deco door frames and angels with vacant eyes. You know that these streets have seen much over the years and just a brief read on Argentine history and one starts to get the picture here.

The route into the city centre follows an elevated highway. As we passed along it, I looked down on the roofs of the city’s traditional neighbourhoods. From here, Buenos Aires appears both unpopulated and infinite; it looks like one place but it is many. On every street corner there are invisible borders of class and identity. As we got closer to the city, shanty towns pushed up against the freeway and even the elevated highway cannot hide them as they also have added stories and become multi level. 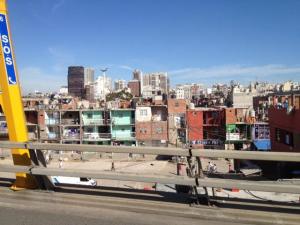 Our driver asked me to put my camera down and not take photos in case we get shot at. Hmmmm, okay, new safety tip. J

Cities with large gaps between rich and poor tend to have much higher crime rates. This epidemic exists horribly in Buenos Aires. Crime and poverty are identified as Buenos Aires’ largest obstacles.

It is hard to get straight facts about poverty here. The government figures are understated – this seems obvious to the naked eye. According to a paper jointly written by the Argentine Catholic University and Catholic Charities over a third of metropolitan Buenos Aires, 34.9%, live below the poverty line. That translates to 4.4 million people, more than double the official Argentine government estimate. 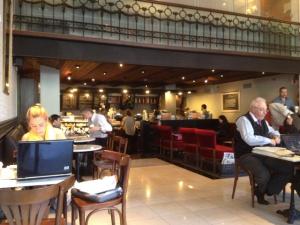 Now sitting in a Starbucks downtown one can hide from the poverty and would never know, but venturing into the communities where Christian leaders are working in and throughout this metropolis and it is a whole other story.

Bob and I stayed in a lovely and seemingly safe community but as we ventured out during our interviews we got to experience the many cities of Buenos Aires.

It is easy for us to keep things hidden away  – even from the poorer parts of our own cities. But people live there, real people with real needs.

I am particularly drawn to the needs of the children in these communities. Breaks my heart. One of the ministries we visited here, Fortalecer, is doing something about it – more on this next blog.